Our Commitment at Equality Florida:

We are committed to combating the rate of HIV transmissions in the state of Florida, which continues to be one of the leading states on HIV transmissions. Since the beginning of the HIV epidemic in the early 1980s, we have witnessed how HIV has disproportionately impacted the LGBTQ community. The fact that HIV has almost completely disappeared from mass media does not mean the fight is over. In fact, since 2013, HIV started sliding down the international agenda, overtaken by other issues and losing important public funding. Yet, now more than ever, it is essential that we take collective action to end HIV by the year 2030 and not lose momentum. 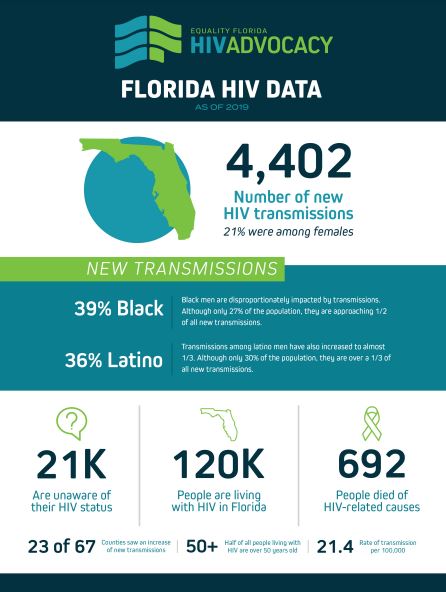 Transgender people have also been hit especially hard despite comprising a similarly small percentage of the U.S. population. While better data is needed to understand the full impact of HIV on the transgender community, one international analysis found that transgender women in certain communities have 49 times the odds of living with HIV than the general population. Although HIV prevalence among transgender men is relatively low (0-3%) according to the CDC, some data suggest transgender men may still be at elevated risk for HIV acquisition.

Our intention is to keep HIV and current rates of transmission at the forefront of our efforts, to elicit conversation to make necessary changes that will ensure a healthy LGBTQ community, free of HIV stigma, misinformation, and HIV transmissions.

Florida is the leading state for new HIV transmissions in the country. As of 2018, Florida ranked number 1 for new HIV transmissions, with 300 cases more than California although they have double the population. Broward, Miami-Dade, and Palm Beach Counties are experiencing the height of the epidemic as the # 1 Metropolitan area in the nation. Still, most Florida counties (41 out of 67) in the state saw an increase in the number transmissions. As the state’s largest LGBTQ advocacy organization, Equality Florida is committed to addressing this public health need through our HIV Advocacy Project.

In 2018, 4,698 people were newly diagnosed with HIV in Florida, which was a 3% increase from 2017. This does not count the more than 20,250 estimated people living with HIV who are unaware of their status. There are 119,661 Florida residents who are currently living with HIV. These figures are conservative because stigma and misinformation continue to be widespread, allowing for HIV transmission to continue at a steady pace.

Equality Florida is actively engaged with a broad-based coalition of organizations working towards modernizing HIV laws in our state, along with the American Civil Liberties Union of Florida, Lambda Legal, SAVE, the Southern Poverty Law Center, AIDS Healthcare Foundation, and the Sero Project. We are proud to partner with fellow progressive organizations committed to combating the stigma of HIV in our state. This work is made possible in part through a grant from the AIDS United Foundation and Elton John AIDS Foundation.